I’m Hattie Waltz from rural Iowa. Ten locals leave for boot camp later today on the eleven o’clock train. I wish the war overseas didn’t exist, but nobody asked for my twenty-two cents on the topic. Every night, I pray for a swift end to the fighting. Every day, I knit socks to hand out to the departing soldiers.

Lena, my dearest friend, and I belong to the Knitting Brigade, a group of women who support our troops by raising funds and knitting socks, fingerless mitts, and scarves. Soon, we’ll elect a new leader for our local chapter. I wouldn’t want that responsibility if it arrived with a box of chocolates, a one-hundred-dollar bill, and a store-bought dress. But Lena would. She excels in those social situations.

At our last Brigade meeting, we stuffed a Proverb into each sock, but picking the perfect scripture took almost as long as knitting the footwear. Twelve women offered twelve different opinions on the perfect verse. Finally, we narrowed our choice to one that conveyed comfort and hope, a winning combination.

I can’t imagine what it feels like to leave the only home I’ve ever known to fight a war overseas. No doubt, I’d shake right out of my button-top boots. The furthest I’ve roamed from my hometown is twenty miles. I’d probably make a lousy soldier.

One of the men leaving today is Arno Kreger, my neighbor, and once-upon-a-time friend. Okay, I had a crush on him for years. But ever since his younger brother died, Arno has changed. He’s quiet, withdrawn, and rowdy. I rarely see him at church anymore, not that I’m the official attendance tracker.

Here are three things I dread about today:

1. The mayor has asked me to sing at the train station. God may have blessed me with an above-average singing voice, but my stage fright ruins everything. Daddy always says, “Do it for Mama.” I’d do anything to please her, even sing in public. Or try to sing in public. She passed a few years back, and I had to drop out of school to tend to things at home. Even though my school-house education ended, I’ve probably read half the books in the town’s library.

2. I worry some of the soldiers won’t return home from the war. I’ve known them all forever. We live in a small German-American community. What if some of the boys face discrimination in the army? What if they land on a battlefield in France and fire at distant kin? Wouldn’t that be awful?

3. There’s a chance I’ll come face-to-face with Arno this morning. A girl never forgets the first boy she handed a sample portion of her heart. Even though he’s probably not the right man for me, I hate that he’s headed toward danger. After all, he’s Lena’s brother. I’m sure that’s why I’m so concerned for his welfare.

If I do bump into Arno, I’ll hand him a sock and a smile. Maybe I’ll tell him something impersonal like “Hurry home” or “God-speed.” But if he looks into my eyes and stands a little too close, I’ll probably say something foolish like, “Please don’t forget me.”

But I’m afraid he already has. 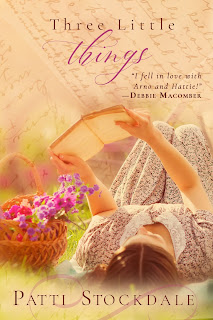 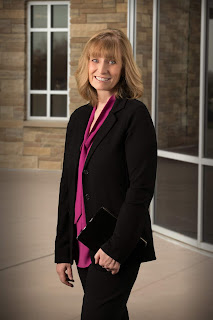 The Author of My Story:    Patti Stockdale


Patti Stockdale loves hope, history, and a good happily ever after. She can’t remember numbers, so she married a statistician. Thanks to him, she’s lived all sorts of places and worked all sorts of jobs.
While employed by an NFL team, she once answered the phone by the wrong team name. She doesn’t work there anymore.
For 11 years, she directed the programming at a nonprofit senior center and hosted an annual talent show, rocking a Dolly Parton wig, Annie Oakley boots, and a sweet—although snug—Batman costume. She no longer works there either.
These days, Patti writes books and occasionally educational assessments and magazine articles.

The author will be honored to gift a winner an ebook copy of
THREE LITTLE THINGS.