My Story BEFORE The Story ~ Mary Clare Casteel ~ Pocket Change

Hello from Pocket, Arkansas. My name is Mary Clare Casteel, but everyone calls me Mac. I’m dying to tell you my story BEFORE the story for two reasons. Number One, the story begins with a murder, and Number Two, it involves a host of my quirky family members and one melt-down gorgeous neighbor—Mick Walker.

As most of my town knows, I worked my way through college at Mr. Chick-a-Booms Chicken Palace. Once I completed my degree in elementary education, I landed a great job teaching, but as a single woman I had to be quite creative with my monthly earnings. I was toodling along okay. Then one day a van pulled into my driveway. It changed my cash flow from OKAY to WOW! The van belonged to the Publisher’s Clearing House folks and they were there to deliver enough money to make me gulp. The fumes from their vehicle still lingered in the air as I rushed to the bank—still in my pink chenille bathrobe and bunny slippers.

Fast forward six months and I was the proud owner of my nearly completed dream business, Pocket Change. Part antique shop, part book store, part cutting edge technology, it held all the things our town had lost over the decades—hope. The current status of our town sagged. It was my dream to restore our little metropolis to its former glory and NOT allow it to be forever known for its ten-mile-long monthly yard sale.

Then the bomb dropped. As my shop sat nearing completion, I made two discoveries. My contractor, Smitty Small, was in our prize Victorian display coffin – dead, and my new neighbor, Mick Walker proved to be an intriguing and helpful piece of the puzzle.

Want to find out more about what took place and who killed Smitty? I’d love for you to join in the fun and pick up a copy of Pocket Change by Debbie Archer. It’s full of mystery, humor, a bit of romance, and a host of Southern traditions I think you’ll enjoy. 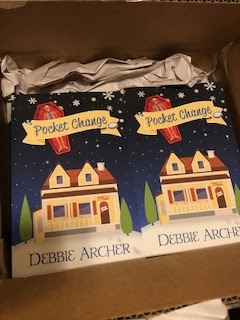 The Author of My Story:    Debbie Archer

Debbie Archer writes contemporary fiction for adults. Humor often shows up unexpectedly. She holds a Master’s Degree in Library Science and a Bachelor’s in Elementary Education. She lives in a small nestled-up part of Arkansas with her incredibly patient husband and a band of rescue animals. 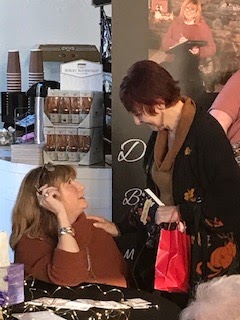 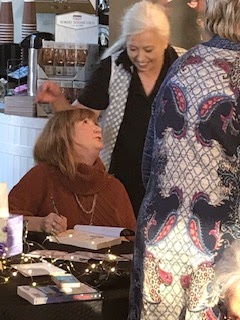 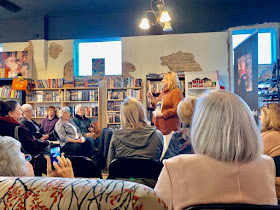 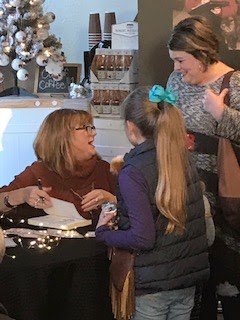 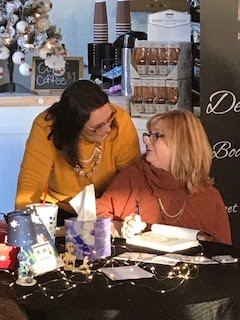 ~My author's book launches went well over the weekend ~
She has generously allowed Joy to share her special moments with  you here!

The author will be honored to gift a winner a signed copy of
Pocket Change to someone residing in the USA.

Be sure to leave a comment
PROVIDING AN UNUSUAL NAME FOR A YOUNG WOMAN WITH PENCHANT FOR EAVESDROPPING!

Include an email address where you can be reached should you win.

My Story BEFORE The Story ~ Candi Reynolds ~ Meant For Her

Hello, my name is Candi Reynolds, and My Story BEFORE The Story may be a bit more than you can deal with. It might possibly trigger something in you that would be best left unread. Read with caution.

Although, I had some things happen when I was younger that I've managed to push out of my mind, my big brother, Cam, helped me move on and we lived together at what used to be our parents' horse farm until I graduated from Schoolcraft High School and entered Western Michigan University.

In my Freshman year, I met a guy there, and his name is Harper Davis Bryant III, and we dated the entire four years there, and we became engaged after graduation.

Harper's father, a senator, purchased a house for us in Bloomfield Village near Detroit, MI. A large, multi-million dollar home, in fact.

My home had been with Cam before I started at the University and during school breaks. Since it was close to a three hour drive between the two cities, Harper and I decided I'd move into the house and work on redecorating it, so it'd be ready to live in as soon as we married in December of 2014.

Harper wasn't pleased about me doing the work myself for fear too many people would find out and feel he and his father couldn't afford to hire everything done. That would never do, since it made them look bad in the eyes of their peers. I explained it was more like a labor of love than sheer hard work, and he finally agreed. I just wasn't to go around telling people. He had nothing to worry about on that point. I didn't know anyone in that area, except the few I was introduced to at the country club or church he and his parents attended.

He also made it difficult for me to keep him at arms' length when he visited, once I'd moved in. I insisted, and he complied, more for the sake of his reputation and the political name he held than for the sake of his spiritual or moral values. That was something I was struggled to come to terms with  way too often.

One night, he was supposed to be picking up his mother at the local country club and joining his father at a campaign rally. Since I hadn't been invited along, I stayed at the house and continued working on painting an upstairs bedroom.

I heard someone at the door, and I thought it was Harper stopping by the house to surprise me before going to get his mother. I went to let him in. I checked the peep hole first, even though I had to stand high on tiptoes to look out. I couldn't see him there, so I thought he was playing a trick, and I opened the door. Probably the worst mistake of my life. 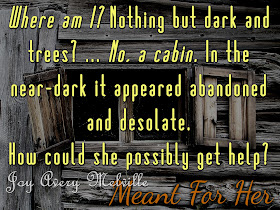 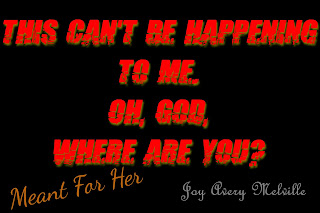 Two men pushed their way into the house,  searched for anything they could sell or use, and  literally kidnapped me.

They hauled me out to a decrepit, old car and made me lie down with my face shoved into the backseat of the stinking vehicle they drove for a very long time.

I couldn't tell where they'd taken me, until we arrived, and they led me into a remote cabin.

What happened next is much too sordid for me to share with you. In fact, I find... it's much easier to push those memories into a closet in someone else's home rather than deal with them myself.

I only know, I was left to die a cold and horrific death... until...

Well... you'll have to get a copy of Meant For Her to find out what happened to me NEXT! 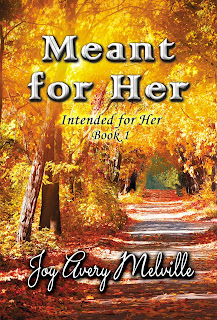 My Story Title:   Meant For Her

The Author of My Story:    Joy Avery Melville 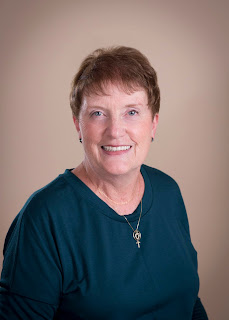 Joy Avery Melville’s heart’s desire is to be the author God has called her to be by sharing Him with readers in such a way they long to have a deeply committed personal relationship with Jesus Christ as Lord.

Fully intending to write Historical Romance—had in fact— she had no plans to deviate from that. God had something else in mind for that ‘call’ He’d made on her life back in 1967. A mere eighth grader at the time, she had no clue about the topics she’d be drawn to write about.

Surrendering to the genre God placed on her heart has given Joy new insight into the hearts and lives of those who too often hurt in silence.

The settings of Joy’s books are near where she lives in Schoolcraft, Michigan with her husband of nearly 46 years and their one-yr-old Yorkie pup, Is-A-Bella Bindi, (Is-a-beautiful little girl) who thinks she’s a much larger breed with tomboy tendencies.


Joy loves to hear from readers and will respond!

To enter the drawing for a copy of Meant For Her  - Please answer the following question:

What does Candi do whenever something traumatic happens to her?

I will be honored to gift a signed copy of Meant For Her  to one who comments, leaving the right answer about Candi and/or her situation above. Each one who comments correctly gets their name in the drawing.
ALSO:
For anyone who signs up for my NEWSLETTER (see right side bar) and CONFIRMS SUBSCRIPTION when you receive an email requesting it,  AND INFORMS ME BEFORE DRAWING IS HELD ... gets your name in a second drawing -
That person will receive an unique gift  - either a treasured bookmark - or - a uniquely wrapped pen with MEANT FOR HER on a bed of fall leaves - done in bead work.....both prizes work perfectly! *smile* 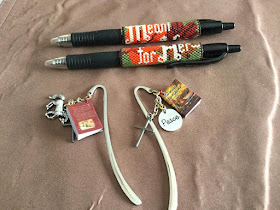 Be sure to leave  an email address in your comment where you can be reached should you win.


I WILL NOT USE YOUR EMAIL ADDRESS FOR ANY OTHER PURPOSE

Hi, my name is Ernestine Sims, Ernie to my family and friends. I’m the mayor of Stony Creek, Wyoming. Things are generally quiet around here, though we’re growing by leaps and bounds since the war ended back east.

For now, I live with my grandmother, though I hope to one day marry. Only one problem—men don’t seem to notice me unless it’s to settle a conflict between two warring ranchers or I’m cutting the ribbon on a new business in town. I may be the mayor, but I’m a lady first. That’s why I decided to get a secret pen pal, a gentleman, someone I can talk without mentioning my work. Things between us were going along swimmingly until the impossible happened.

My grandmother got a beau.

Hi, I’m Jack Randolph and I’ve come back to Stony Creek with a newly minted law degree and the urge to finally settle down. But law school doesn’t leave much time for courting, so I followed my grandfather’s advice and started a correspondence with a young lady he thought would be perfect for me. But I’d barely stepped off of the train before I landed in another one of Ernie’s madcap schemes. Teaching Ernie how to land a husband has opened my eyes and my heart to my beautiful best friend. But what about my secret pen pal? I can’t ask her to come to Stony Creek, not when all I can think about is taking Ernie in my arms and kissing her senseless.

Then I discovered the truth. 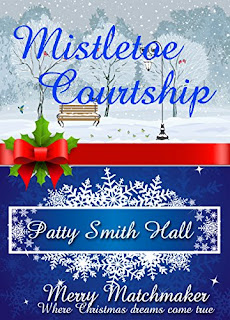 The Author of My Story:   Patty Smith Hall


Multi-published author Patty Smith Hall lives near the North Georgia Mountains with her husband, Danny. When she’s not writing on her back porch, she’s spending time with her family, reading or working in her garden.

Note from Patty Smith Hall:
I will give away a copy of Mistletoe Courtship as well as my new release, Crinoline Cowboys. Mistletoe is E-book while Crinoline will require a mailing address.