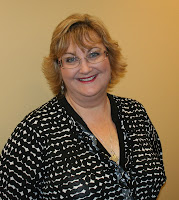 
Janice Hanna (also published as Janice Thompson) has published more than seventy novels and non-fiction books. She has also published more than fifty magazine articles and several musical comedies for the stage. Janice makes her home in the Houston area near her children and grandchildren.
Please tell us three random things we might not know about you.
My dad was the president of the University of Houston Cougar Cagers Club, so my birthdays, holidays, etc. were spent at basketball games. Our family traveled to Mexico with the U of H Cougars to watch them compete, which was great fun. When I was eleven, I got to play (for fun, of course) with the Harlem Globetrotters, who came to Houston for a visit. To this day, I love a good basketball game.
I once lied to a fellow camper at church camp, telling her that my dad (Billy Hanna) was William Hanna of Hanna/Barbara (Flintstones) fame. That lie still haunts me, though, to his credit, my dad did eventually work as a movie producer on our co-authored movie, Liar’s Moon. (Yes, it’s true. I got to meet and work with Matt Dillon. Eat your heart out, girls!)
I occasionally bake wedding cakes. In 2009 I baked a lovely four-tiered white cake with strawberry filling and cream cheese frosting that toppled less than an hour before the wedding. I managed to piece together two very messy/ugly layers. Thankfully, the bride did not murder me. It made for a great scene in a later book. (Nothing ever gets wasted, not even a mashed piece of cake.) 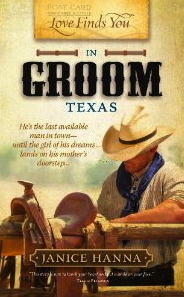 Please tell us a bit more about the plot of Love Finds You in Groom, Texas.


Leave a comment to be entered the drawing for Janice Hanna Thompson's book: Love Finds You In Groom, Texas.

Drawing to be held next Monday night.  I'm so thrilled to have had Janice here this week - she's the greatest!