FREEDOM ISN'T FREE - I'M JOY~FULLY FREE DUE TO SO MANY WHO'VE GONE BEFORE!

I want to personally thank all who've gone before, and those who are now serving to insure a safety zone around us as Americans.

I have two brothers who served, one in Germany and one in Viet Nam. They came home, scarred by other than mortar fire or bullets but scarred none-the-less. My eldest brother's son, my nephew, served in Germany, was scheduled to come home but volunteered to go to serve longer in Desert Storm. He worked as Military Police, a less than pleasant job but came home without having been injured. We praise God for His blessing in that.

There is no draft and yet, there are more and more volunteers signing up, knowing they will most likely be drawn into one of the conflicts our country is involved in at this time. 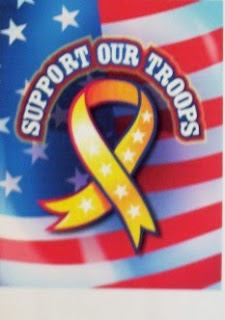 It is so refreshing for me to see the numbers of young, talented, intelligent and dedicated young people studying and working to become the best and brightest to keep our country from succumbing to terrorism and those who would infiltrate our borders to harm and destroy those freedoms we enjoy and most often take for granted.

We have so much to be thankful for. First of all, to our GOD who provides and protects the country once founded on His principles. And second, to those who've enlisted, without compunction, gone to countries so unlike the United States to be considered polar opposite.

If we value this country, these privileges we often, much too often, see as rights and all God has allowed us to experience and enjoy, we'd better be dropping to our knees in gratitude for having been shown His mercy for so long.

It's time for each of us who values the liberty we were born into and who would love to see our grandchildren and their children live with the same freedoms we were raised with to bow, before our most Holy Lord Jesus Christ and humble ourselves.

STOP! Think, what freedoms have you seen taken away say, in the last ten years, twenty, thirty years? When do they stop being taken away?

Let's project just a bit . . . if the same process continues what will another twenty years be for America? This land of the free and home of the brave.

"If my people, who are called by name will humble themselves and"  . . . when will it end? Will God be merciful to America and the fewer and fewer who see WHO is really in control be allowed to prevail?  Will God see fit to destroy America or at the very least allow one of our enemies over power the 'super-power'?

During this Memorial Day week, let's REMEMBER just how many very special freedoms we've seen taken away and bow before the ONE who can restore those as well as make America what HE really wants it to be.


< MAY GOD BE PLEASED TO STILL BLESS AMERICA>
There is something even more important to remember:
There is none so free as the one who knows how to accept eternal life.
There is only ONE way: "I am the Way, the Truth and the Life - No one cometh to the Father but by me."
-John 14:6
Where true FREEDOM lives!
journeystojoy.net at 6:00 AM
Share